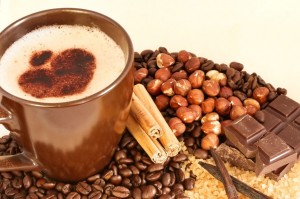 By the legend of Kaldi, coffee trees in the Ethiopian highland grows for centuries. The legend says that that Kaldi discovered coffee by accident. He noticed that his goats, after eating berries from one certain tree, became very spirited and did not want to sleep at night. Kaldi told about his findings to the abbot of the local monastery. The abbot made some experiments with the berries and noticed the energizing effects. He started making the drink from those berries and give it to the monk as they would not fall asleep during the night prayers. The knowledge began to spread not only in the monastery, but far away. The big coffee journey to the eastern world began then the coffee reached the Arabian peninsula.

These days coffee is grown in different countries around the world – Asia, Africa, Central and South America, the islands of the Caribbean or Pacific and the Ethiopian plateau.

What is Flavored Coffee?

Some people think that flavored coffee is a modern invention, but in fact its origins are very old. In the Middle East few hundred years ago people used to drink coffee blended with spices and nuts. Modern days we have flavored syrups and some other types of chemical flavorings (sometimes natural, sometimes not) which are put onto the beans in post-roasting process, when flavored beans are brewed and so the beverage is well flavored. Sometimes flavors give coffee a very strong smell, but not the taste. Do not know how to make a Flavored coffee? Just pour some syrup or your favorite spices and that is all.

Some coffee drinkers says that it is very disrespectful to the coffee because coffee has a good flavor of its own. Quite often the beans which are used to make flavored coffee are not the highest quality so the drink might be delicious, but poor. Benefits of Flavored coffee is that if you want to make a good quality of flavored coffee you may use any syrup or add some spices to ground coffee beforehand (a bit of cinnamon, cardamon, vanilla or almost any other powdered spice).