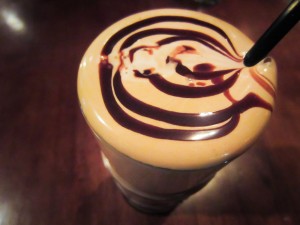 What is Frappé Coffee?

It is a foam covered iced coffee drink made from instant coffee and it is very popular in countries, where weather is hot: Greece Cyprus, etc., especially among young people and tourists. Frappé become a mark of outdoor Greek coffee culture and it is called the national coffee of Greece. Most important benefit of Frappé that it is a very cold coffee.

Frappé was invented by accident in International Trade Fair in Thessaloniki in 1957. Yannis Dritsas represented Nestlé company and was exhibiting a new chocolate beverage for children. Dritsa’s employee Dimitris Vakondios during his break wanted to make a cup of instant coffee, but could not find any hot water. So, he mixed the coffee with cold water and ice cubes in a shaker. Frappé has been marketed chiefly by Nestlé.

How to make Frappé Coffee?

Frappé can be made with a cocktail shaker or any other type of mixer. One or two teaspoons of coffee, sugar (depends on a taste) and a little water are blended to form a foam. A foam layer of Frappé looks similar to the foam of Espresso, but it is much thicker and has the different composition. The foam is poured into a tall glass, cold water or evaporated milk and ice cubes are added. Frappé is served with a drinking straw and a glass of water.

Ice cubes are very important part of Frappé. It is a ritual to rotate the drinking straw mixing the drink and listening to the sound which is made then the icecubes hit with each other and with the glass.

To create a flavoured coffee liqueurs or vanila ice-cream can be used as well.